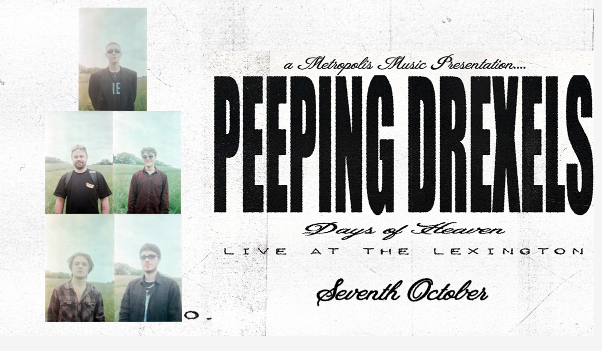 Friday, October 07, 19:30
adv £9
Peeping Drexels are a band who cannot stand still. From enfant-terrible rabble rousers of the South London scene,to a band who now prefer the textures of Nico and David Berman. Any scenester camouflage has been truly dispensed with. The band are beginning to find their truest sound yet.

It is fitting that the new EP ‘Days Of Heaven’ tributes Terrence Malick’s greatwork, a film where the viewer is thrown into the action, where misery and beauty collide and where neither can lay claim victory. Honing in on a more intimate and delicate sound, compared to previous work, the quieter and more reflective moments will surprise those familiar with the band’s more maximalist approach to date.

The band have been playing shows in South London since they were teenagers. Now, still only in their early 20s, they are gearing up to release this EP in Sept, with a debut album planned too.

The EP was recorded with Paul Cousins at both his studio in North London as well as the band’s ex-house share in Penge, South East London. On these new songs, the band are backed by vocalists Alice Cakebread and Francesca Scott-Sils.

The London based band have previously received support from the likes of Steve Lamacq, DIY, So Young, Clash among others; building a cult following in the South London scene. Peeping Drexels have shared stages with the likes of Shame, Goat Girl, Public Practice, ViagraBoys, Fat White Family and are considered one of the hidden gems in an area rife with musical talent. The band will headline London's Lexington to celebrate the release.