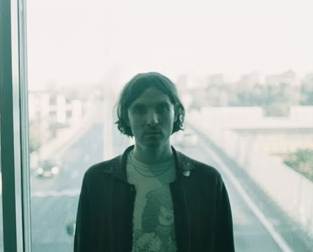 Astrel K's debut single ‘You Could If You Can’ was released via Duophonic Super 45s - a label which has a history of releasing limited edition abstract releases from Stereolab, Broadcast & Yo La Tengo. 500 copies of the 7” were made, hand stamped and numbered, quickly selling out in selected record shops.

Following the loss of KEN, a shared house in which Ulrika Spacek band members lived and worked from, Edwards relocated to Stockholm, Sweden where he began making music on his own:

“At this time, I didn’t really know anyone in Stockholm so kinda retreated into making music just by myself. The album title definitely reflects this period; I was on my own making music and sometimes nothing would be happening and sometimes there would be little sparks of ideas that could keep me going”

Edwards would spend nights writing and recording in a shared rehearsal space producing music rich with layers and texture, synonymous with the work of Ulrika Spacek but with perhaps a greater focus on the art of ‘song writing’. Tracks with verse’s and chorus’s are surrounded by instrumental interludes; inspired by old library music and compositions for film as well as being reminiscent of bands such as Broadcast.

The album doesn’t sound like one made in either London or Stockholm, rather somewhere in the nether region. Written pre pandemic but mixed in the past year, the music led Edwards to finding like minded musicians from the Stockholm music scene:

“Though I’m now glad I can say I wrote an album by myself, I was definitely confronted with my own musical strengths and weaknesses. Sometimes when you have an A/B decision you want some perspective and you’d be in the studio, turn around and no one is there. It really made me curious to bring in more people into the fold, not to compromise any original vision or anything, but to have other energy in the room, to exorcise out any lazy tricks I may fall into”.