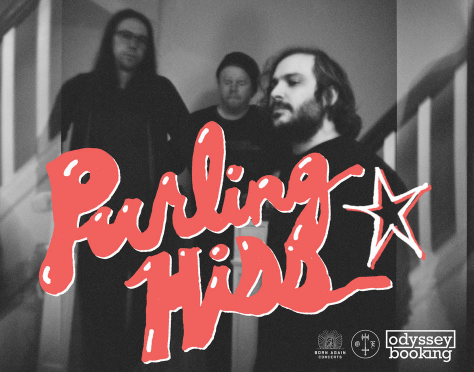 Friday, September 09, 19:00
adv £15 + booking fee
After they got back from Mars, Purling Hiss went back down to the basement  — but they came up again after they got their Weirdon!

Full-tilt with tunes, aggro riffs, feedback peals, stoned soul-searching, pop turnarounds and magisterial portraits of the go-nowhere lifestyle in abstract, Weirdon is also a new-phase Purling Hiss album, using the songwriting and guitar style of Mike Polizze to come up with a quicksilver sound touched on only briefly on previous records. Replete with handclaps, pounding pianos, tambourines and vocal effects, but steeped in guitar roar, Purling Hiss streamlines up nicely, serving the new songs and directions of Weirdon while still slamming down hard on your ears like they like to do.

Simultaneously ramshackle and overblown, tactile and free, the early Purling of Hissteria and Public Service Announcement used DIY limitations (in fab collab with Polizze’s classic guitar racket) to soar through stereo speakers and ear boobs alike with a new rock sound (NOT the same as the old sound). As listeners came gathering and gathering, the call for shows and more shows and then tours became an issue — so Mike expanded Purling Hiss from just his guitar and tape recorder and him into a full-blown trio, capable of lifting heavier than even the records’ thick layers of distorto implied. Now the guitar worked together with the rhythm section rather than fighting it, “Sister Ray”-style. In addition to its amazing songs, their previous album, Water On Mars exploited the bombast of the live, power-trio incarnation, but in order to put the next set of songs across, Mike needed to go to another dimension in his mind.

The through-line from genesis to Weirdon flows solid, despite the hard sonic turns on the way. The wicked good humor of “Almost Washed My Hair” on the Hiss first album has evolved seamlessly into the laconic angst ’n’ anthems of Weirdon, like “Learning Slowly,” “Forcefield of Solitude” and “I Don’t Wanna Be A...” After trading the distant drum of early days for a thick, upfront kit sound on Water On Mars — additionally revealing real words attached to Mike’s vocal melodies — Purling Hiss have spread it out again, pushing Mike’s guitar tides over the top, splashing across the drums and vocals. The mix retains a certain clarity nonetheless, even when it matches the crush-and-whine of cheap rhythm sounds with mountainous body, singing leads and infinite distortion layers.

If Water On Mars was the Purling Hiss heavy rock album, Weirdon travels into the pop dimension of Purling Hiss, making of their fastest and catchiest songs in the abiding images of punk and psychedelia. Written alone to achieve a contrast with the previous album and return in a sense to the original approach, Weirdon was made with no concept of limitations on what could be performed live. Mike’s new songs open up, going all over the place, while still based in their home-cooked blend of catharsis and shredding, both in the guitar playing and the inner life of the album. Full of color and rock and roll, Weirdon is a rainbow of a record; beaming down to the stereos and streets and highways and boomboxes of today, through the unique and still-growing prism of Purling Hiss.