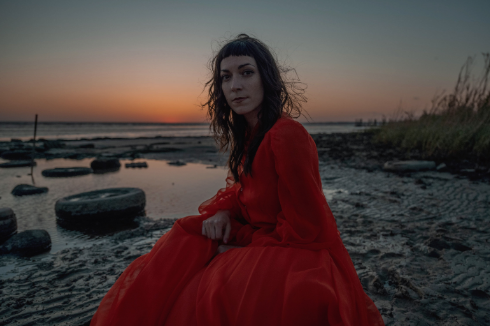 Wednesday, November 16, 19:30
adv £11 + booking fee
Alongside death and taxes, transformation feels like one of life’s few guarantees. Whether we’re conscious of it or not, we’re constantly evolving and refining the things that define us. The changes we undergo give us an opportunity for perspective – to see how far we’ve come, to honor our former selves, and to understand our current self. New Orleans-based singer/songwriter Julie Odell thinks a lot about transformation, and it’s a word she uses to sum up her debut album Autumn Eve, out this fall via Frenchkiss Records.

For Odell, her biggest transformation was becoming a mother, which sparked a chain reaction of other changes in her life. “Because I started writing the songs when I was traveling from place to place and working on farms, I felt very foundationless and uprooted,” Odell says. But when she gave birth to her daughter, she wanted to put down roots, and she felt it was the perfect chance to live a simpler, healthier life. “I was 26 when I had her, and I was just a baby having a baby,” Odell says. “There was so much growing I had to do when she was born … I was just too reckless with my life before that.” She says motherhood has made her more understanding of other people and it’s also made her more willing to stand her ground and advocate for her needs.

Odell wrote roughly half of the songs that make up Autumn Eve several years before becoming a mother and the other half afterwards, which means half of the songs predate these personal transformations and half were written while in the thick of things. As a result, listeners are introduced to several versions of Odell, with the album functioning as a rich tapestry of her emotional growth. This also means that some songs have double meanings for Odell, who now views her pre-mother self with much more compassion.

Odell’s mother is a painter, and her father is a potter, and she spent much of her childhood in the back of a van, trekking to art festivals and craft fairs for months at a time with her parents, which was how they made a living. She was surrounded by artists and their art for her whole life, so it was only a matter of time before she started making her own art. After she began writing songs on the family upright piano and performing at open mic nights, she played “dainty piano waltzes” as an opening act for hardcore shows in South Louisiana. Then she formed a psychedelic folk-rock band called Giant Cloud, who toured frequently and released an album on Park The Van, before writing and performing music under her own name.

Musically, Autumn Eve is as much about transformation as the lyrics. Her flickering quiet-loud dynamics are an integral part of the album, and she attributes these exploding and collapsing sounds to the rapidly changing landscapes she used to watch through the window of her parent’s van as a child – with views alternating between deserts, mountains, and the ocean. Her music is folky, dreamy, and soulful, marked by her powerful, peculiar vocals, detailed textures, and an instinct for immediate songcraft. Her songs are complex and multifaceted, in part because they don’t follow expected trajectories or settle into long stretches of even-keeled languor. “Internally I always feel either really chaotic or really calm,” Odell says. “So, it's a lot of really loud, fast-paced stuff, and then it'll shrink down to really quiet delicate things. I'm obsessed with dynamics.” Odell wanted to be a meteorologist when she was a kid, chasing tornadoes in a van with all her friends. Although she chose a life as an artist instead, she reckons she’s chasing musical tornadoes, since her songs are wispy, unpredictable beasts.

“Caterpillar” is a great example of her unique attention to detail and the way her songs beautifully morph, with varying tempos, vocal deliveries, and noise levels, and keyboard flourishes and guitar strums that twinkle so artfully and subtly that they feel like brushstrokes. “Cardinal Feather” is another quicksilver ripper, with both a graceful, silky patience and fiery rock motor. But perhaps most jaw-dropping is the nine-minute title track, whose metamorphoses are just as epic and humbling as those of butterflies, which Odell often tends to on her porch with her young daughter watching nearby. Throughout “Autumn Eve,” which closes the album, layers are gradually superimposed over one another before they’re completely stripped away and new ones appear – even more majestic and gripping than the ones preceding them. This song is the album’s centerpiece, as it captures Odell’s experience growing into motherhood more succinctly than any other song on the album.

“Mother nature called on you to be a mother / Raise your baby right,” Odell repeats at the tail end of the song as a beautiful assurance to herself that she’s exactly where she’s supposed to be and as a reminder to continue following her instincts. Another lyric central to Autumn Eve comes from “Envelope,” as Odell sings, "To be a human being / in love with the simple things / A list of all they need / is as long as one word reads / Love.” It’s a testament to the philosophy of simplicity that she’s taken on since becoming a mother, and although focusing on the simple things in life might seem cheesy, Odell leans into that sentiment and presents it in a way that feels sharp-witted and touching.

Odell describes pursuing music as a “huge, sparkly dream,” and Autumn Eve certainly sounds like one, too. Whether it’s downpouring rain from Ireland (“St. Fin Barre”) or fireworks over the MIssissippi River (“People Cheering”), there are countless sonic details that make the album feel like a treasure trove and a place more grand and beautiful than reality. Listening to this record feels like you’re sitting in Odell’s family van, absorbing delightful new landscapes through the window every few minutes, and you’ll never want the gorgeous fever dream to end.