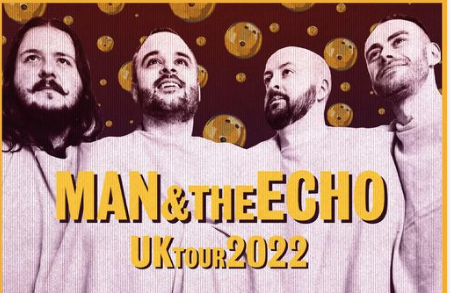 Man And The Echo

Saturday, October 01, 20:00
adv £13.20
Man & The Echo are a Warrington based 4-piece band, comprising of Gaz (Guitar & Vocals), Fush (Bass), Chris (Keys), and Joey (Drums). They perform their unique brand of smart-arse pop in venues around the UK and sometimes in Europe. Their music has been described as "agitprop," "art pop" "almost afrobeat punk" "frantic" and "soulful" - none of which is quite right, except when it is. As well as making music Man & The Echo often direct their own music videos because it’s cheaper to do it yourself and you don't end up looking like quite as much of a prat, except when you do.

They are not prolific, or highly motivated and do not enjoy hanging out with other bands at festivals and so on - but they're punctual and polite and so enjoy a good reputation for being reliable and always bringing their own equipment. As such they've played at major festivals including the main stage at Kendal Calling and the Leftfield stage at Glastonbury, having been invited personally by Billy Bragg.

They've toured with bands such as The Divine Comedy and She Drew the Gun, and worked with producers like Raf Rundell (Two Bears) and Neil Comber (Django Django, M.I.A).

Man & the Echo live shows aim to be entertaining and memorable. For their last headline tour to promote the album "Men of the Moment," M&TE performed the show as a piece of musical theatre in a wild (and ultimately futile) grasp for critical acclaim (there were different hats involved). This was warmly appreciated by some of the audience.

The lyrics are something that are often remarked on because they are funny (actually they're mostly just sad but in a way that rhymes and this often makes people laugh) but that should not detract from the fact that these guys can really play, boy can they play, some of them can really play. The music is also good essentially.

Quite a lot of people think they are okay, but some people think they're absolutely top, like one of the greatest bands ever, and their lack of success and fame tortures these people, they become obsessed - "why aren’t Man & The Echo bigger?" they tweet every few months, "Why aren't they huge?"

To these people Man & The Echo would simply say - "Relax! Don't worry about it, it isn't your problem, just keep coming to gigs and buying T Shirts etc if you're able to and we'll keep pulling these albums out of our arses when we can." This is an example of them being polite.

Praise for Man & The Echo:

"Man & The Echo are one weird bunch of blokes but strangely made themselves look really cool." - indiecentralmusic.com