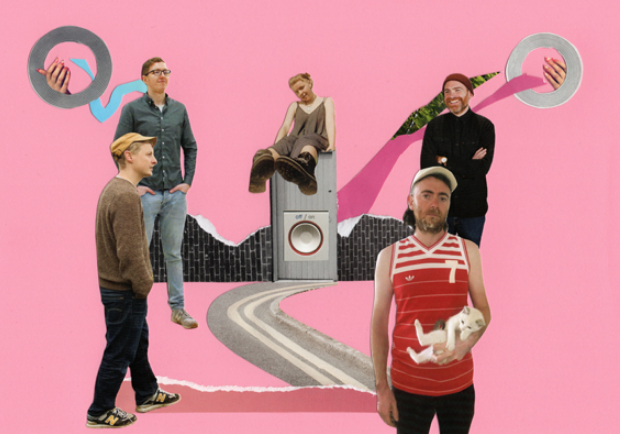 Inspiration can strike anyone at any time, and more often than not from somewhat peculiar quarters. Rarely more so than when Sam Grant - best known as guitarist and producer of Pigs Pigs Pigs Pigs Pigs Pigs Pigs - finally set about work on a solo project that had been pursuing him for some years. “It’s easier to describe it materialistically than by any other way.” he reasons “I want people to imagine that feeling of rubber - its physical memory, the unnatural vibe of it. It’s so tactile but alien, but also difficult not to know. It’s an odd analogy, but that’s what this music is for me.”

Today, Grant shares the second single from his debut, "Nothing" and explains, "Ultimately, ’Nothing’ is a song about the weight of thought, and the freedom in letting go. But the lyrics are meant to sit in a space that’s both optimistic and hopeful, and equally readable as pessimistic and futile - playing with the ideas of dualism and Nihilism." He goes on to say, "There’s an alluring sense of the Optimistic Nihilist in the track - that prospect of knowing your own inconsequence could be liberating. But it’s always tethered to the paradoxes that creates."

Strange Craft is a deliriously tuneful sci-fi tinged psych-pop. Mapping out a retro-futuristic trajectory that stretches from the wide-eyed travails of the late-’60s through to the hard-edged mind expansions of the 21st century, this collection of warped interstellar voyages is intent on taking the scenic route across the cosmic continuum.

The project took shape initially in snatched hours around Grant’s regular job as studio engineer at Newcastle’s Blank Studios. Not content with completely revamping this facility over the pandemic period, Rubber Oh initially took shape as a means for pure indulgence on the part of its creator, in which he could set about scratching every itch that he’d been forced to discard when working for others.

Paradoxically, certain rules of thumb were utilised, with each track constructed in counter-intuitive approach to the riff-driven world of his main band - across a subterranean low-end bedrock of two bass guitarists, a complete absence of cymbal wash, and only single notes allowed on guitar. While Grant performed the majority of the music, help from friends and acquaintances was enlisted, such as Pigs’ Chris Morley on drums as well as Matt Baty [Pigs x7] and Beth Jeans Houghton [Du Blonde] counting amongst the backing vocalists, all amidst a wash of celestial ambience and curlicues of analogue synth.

At the end of last year, we were treated to the first taster of the album, the fuzzy, blissed out single Little Demon

Strange Craft is fuelled up and ready to accept all comers on a ride into extensions through dimensions.