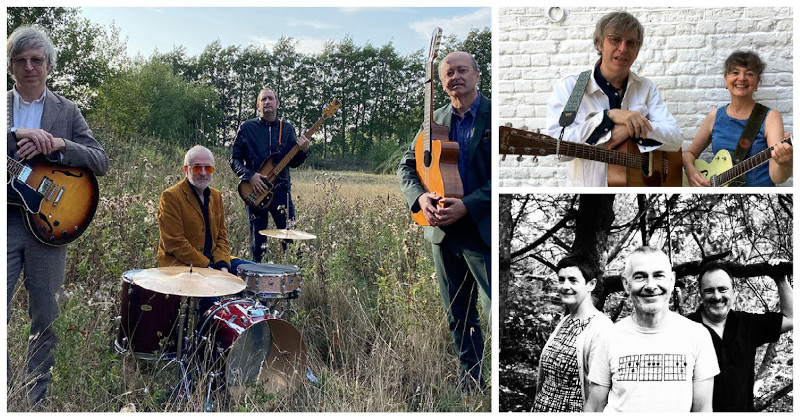 Three great acts in one night. Louis Philippe & The Night Mail -
A central figure of the legendary él label, French singer-songwriter, arranger and producer Louis Philippe has been creating a refined world of pop songs influenced by Maurice Ravel as well as the Beach Boys for nearly forty years now. He has also collaborated with Danny Manners, Stuart Moxham, Bertrand Burgalat, Alasdair McLean, Sean O'Hagan, Matilde Santing, Valérie Lemercier and many others.

Helen McCookerybook & Robert Rotifer -
The joint project of Helen McCookerybook & Robert Rotifer Helen (The Chefs, Helen & The Horns) has released 8 solo albums and produced a documentary on She Punks with Gina Birch, based on her book ‘The Lost Women of Rock’. Robert, born in Vienna, living in Canterbury, has released 11 albums, collaborated with Wreckless Eric, André Heller, Darren Hayman, John Howard, Louis Philippe & others.

European Sun
Steve Miles writes, sings and plays the songs of European Sun. Rob Pursey and Amelia Fletcher play, sing and produce the songs of European Sun. ​Rob and Amy are also The Catenary Wires. Their latest album ‘Til the Morning’ was released in 2019 on Tapete Records. Prior to that they played in Talulah Gosh, Heavenly, Marine Research and Tender Trap. ​Steve is also in The Short Stories and before that was briefly a member of Modesty Blaise. After the release of the last Short Stories album, 'Send My Love To Everyone', in 2014, Steve turned to acoustic guitar, and began playing live just with legendary bassist Chris Wilson (Lloyd Cole, Love Spit Love) or solo. At one such solo outing in August 2018, Rob and Amy offered to play on one of Steve's songs. And out of that collaboration - eventually - came European Sun, just in time for a new decade.