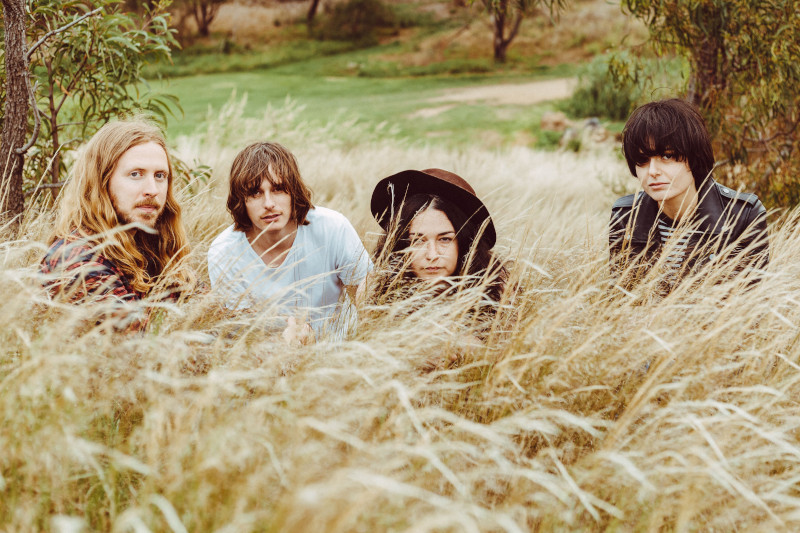 Monday, May 02, 19:00
adv £9.50 + booking fee
Rescheduled show - original tickets valid - A dense swirl of multilayered and orchestral swathes of guitar, a sonic cathedral where influences both sacred and profane meet to confect a divine offering that is formed of a particular type of musical alchemy . This is the higher plane where Flyying Colours exist.

Taking form in Melbourne as the 2010’s drew towards their denouement, Flyying Colours have built their dense but intricate musical DNA around the interlocking guitar play and vocal symbiosis of Brodi e J Brummer and Gemma O’Connor. Flagbearers of Australia’s world renowned shoegaze scene, the four piece may on initial encounter appear to take cues from seminal influences such as My Bloody Valentine and Ride. However, as their sound has developed over t he course of two acclaimed EP s and album release, they’ve incubated what can only be described as their own Australian blast of howling yet delicate noise; a multilayered sensory overload underscored with the delicate filagree of Brummer and O’Connor’s et hereal boy/girl call and response vocals. Quickly achieving headliner status in their hometown, with rapturously received sold out shows that quickly took on the status of events rather than mere gigs, the band were quickly tapped for an enviable list of tour support slots with the likes of the Jesus and Mary Chain, The Brian Jonestown Massacre, Johnny Marr, A Place to Bury Strangers and The Black Angels.

Far from content to rest o n such worthy laurels, the group have also made their mark on the festival a nd international touring circuit , adding St Jerome’s Laneway Festival, Primavera Sound, London Calling in Amsterdam and hotbed of ones to watch, The Great Escape in Brighton in the UK. Joined by Melanie Barbaro and Andy Lloyd - Russell on bass and drums, Fl yying Colours spent 2019 bunkered down in the studio working their sophomore album due in mid 2020, that arrives after a conception process that was beset with all the cliched ‘difficult second album’ tropes, but promises that the studio and songwriting la bour was more than worth it.

Their startling new long player shows Flyying Colours assured and confident in their songwriting and meticulous in their studio craft, enlivening their trademark wall of sound with trebly widescreen panoramas recalling The Cure at their most epic and the Aussie sunshine psychedelia of Tame Impala at their most luminescent. With an album in the can that delivers on the promise many industry tastemakers have so widely tipped , 2020 sees Flyying Colours set to take their swooning c rescendos of iridescent rapture to wider audiences both at home and overseas.