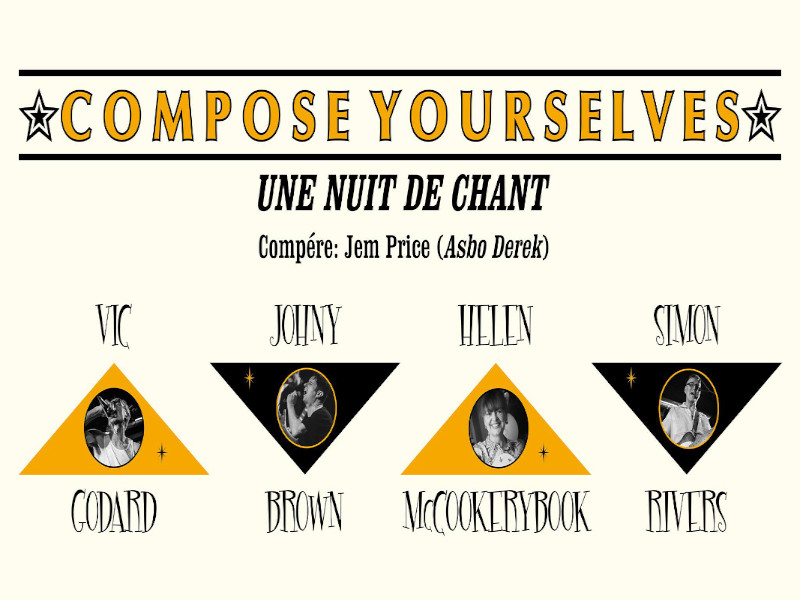 Saturday, March 21, 19:30
adv £13.20
Four of the country's most original, progressive, and timeless song-writers assemble in London for "Compose Yourself - Une Nuit De Chat". Expect solo performances, duets, and genuine bonhomie, but most of all, expect the unexpected.

Vic Godard
Since 1976, and the formation of Subway Sect, Vic has ploughed his own distinctive furrow. Denouncing punk as trad rock 'n' roll, Vic took his influences from literature, film and art. With a career now spanning more than 40 years, he continues to plough that furrow. 2019's 'Mums' Revenge' was released to wide spread critical acclaim and a string of sold out, high energy, shows. 6 Music's Marc Riley simply refers to Vic as “the greatest living Englishman”.

Johny Brown
Hailing from the North-East, Johny moved to London, and, in the mid-80's formed the unimpeachable Band of Holy Joy. With 2017's 'Funambulist We Love You' and 2019's 'Neon Primitives' the Joy are at their sublime best. Where ever Johny leads, I, for one, will gladly follow. Live, Band of Holy Joy is an experience not to be missed. I expect more of the same from a solo Johny.

Helen McCookerybook
Don't be taken in by the pseudonym . Also from the North-East, Helen is the hardest working singer/songwriter/author/film maker/lecturer/illustrator on the planet. Her credits stretch as long as the Tyne. Helen first came to prominence with Peel favourites The Chefs and Helen and the Horns. She now, mainly, performs solo and has become a favourite of 6 Music's Gideon Coe. 2017's full length release 'The Sea' and 2019's 'Green' are must haves in anyone's collection.

Simon Rivers
Founder, lead singer, and songwriter for Last Party, The Bitter Springs and, most recently, Oldfield Youth Club, Simon is an observational writer who takes you places only you and he know about. In my opinion, and I'm far from alone here, Simon is one of the greatest lyricists this country has ever produced. He recently reduced me to tears in an instant, on first hearing of a new song slated for next year. Yet another example of unsurpassed, poignant songwriting. 2019 sees the release of 'The Odd Shower', the 9th album from the Bitter Springs and work commences on the debut album from Oldfield Youth Club.
https://www.facebook.com/events/412790429377061/