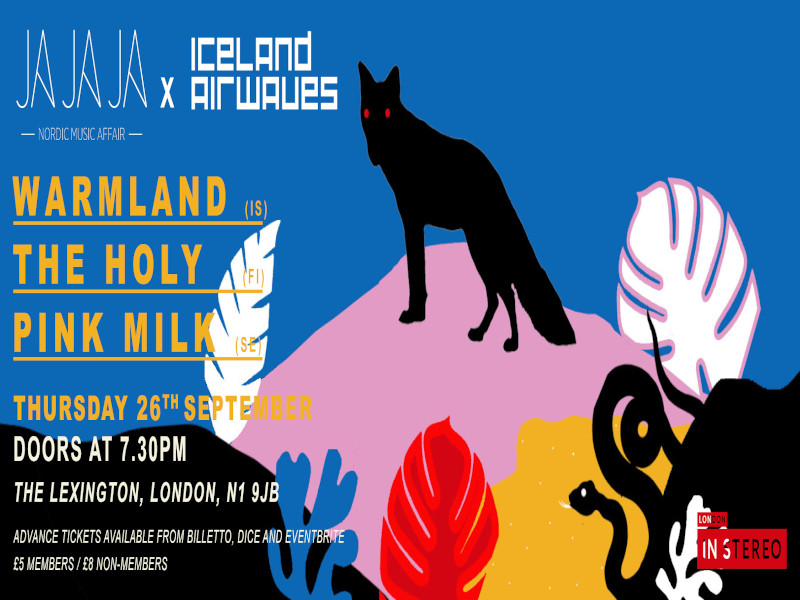 Returning from our summer break, the Ja Ja Ja Nordic club nights are back and set to embark upon their 10th anniversary season (!!!), kicking off with a show in collaboration with Iceland Airwaves Festival!

This collaboration highlights two spaces through which new music fans can uncover the best emerging sounds from the Nordic region, so read on to meet this superb line up.

Ja Ja Ja is brought to you in association with our media partner, London In Stereo.

WARMLAND is a new Icelandic duo from Reykjavík, consisting of Arnar Guðjónsson and Hrafn Thoroddsen, two Icelandic musicians who met while touring across China in the same band. With a ton of extra-dimensional psych-pop songs, their debut album Unison Love is a 12 track manifesto, a finely balanced showcase for a partnership that runs deeper than most.

But there’s an extra dimension, too. WARMLAND made their live debut with a rapturously received show at Iceland Airwaves, displaying the visual depth to their concert experience – on its release, each song on the album will be paired with a specially crafted video, vastly expanding on their sonic creativity.

WARMLAND’s music is cinematic, has a visual side to it. It all plays together. It’s all done in-house. videos, music, and programming lights, WARMLAND has full control.With their impeccable pop songwriting and their daring experimental excursions WARMLAND channel sheer Icelandic cool on a debut album that both encapsulates and drives their friendship forwards.

The Holy are a Finnish alternative rock band formed in Helsinki in 2014. Their highly anticipated and critically acclaimed debut album Daughter was released in 2018.

The quintet has been shaking the grounds of the Nordic indie scene since the release of their More Escher And Random Notes EP in 2016. Mixes of post-punk, Bruce Springsteen and Peter Gabriel with kraut influences are often mentioned when speaking about The Holy’s well crafted sound and songwriting.

Hailing from one of the darkest countries in the world, The Holy is best known for their Nordic melancholy, highly explosive live shows, and for the unusual band formation that includes two drummers who keep the pulse high all the time. The lead singer’s tense and timeless voice and the guitar loaded wall of sound you often makes you feel comfortably uncomfortable.

Starting out in the small venues of Helsinki, they have travelled a long way performing over one hundred shows including all the major festivals in Finland e.g. Flow Festival, Ruisrock and Ilosaarirock and toured across Europe in Sweden, Germany, UK, The Netherlands, Switzerland, Luxembourg and Austria. They have showcased at Eurosonic ‘19 (shortlisted by ETEP), Reeperbahn Festival, Where Is The Music, Ja Ja Ja Berlin & Vienna, and Finland’s own Lost In Music many times.

Their debut album Daughter gathered praise both overseas and in Finland, resulting in an EMMA-nomination (Finnish Grammy) for Critics’ Choice ‘19. The reviews were hugely favourable and praised the honest songwriting and lyrical themes of the album including topics like 90s Finnish economic regression and its reflection to the youth its time. In 2019 they have been busy touring festivals across Europe and recording their second album, Mono Freedom.

”A devilish congregation of swirling shoegaze guitars, beats that shake the foundation of time, howling, windswept drones, and vocals laced with barbed wire” – The Line Of Best Fit

”One of the most consistently great post-punk albums of the year.” – The Independent

Hailing from Sweden, Pink Milk is a dark wave/post-punk band drenched in reverb, making occult music inspired by the 80s. The duo started out releasing songs in 2015, quickly growing a reputation for their gloomy glittering sound and enslaving melodies, being praised by DIY, Wonderland, Kerrang! and Virgin Radio amongst others.

Their debut album Purple was given the highest rating in Swedish music magazine GAFFA who called it ”a dazzling display of alternative rock music” and ”the best album in many years” while the British magazine The Indiependent called it ”one of the most consistently great post-punk albums of the year.”

In 2018, Pink Milk went on tour, spreading their cinematic inspired soundscapes at festivals and clubs with acclaimed shows at Subkultfestivalen, Trästockfestivalen, Umeå Open and the Peace & Love Festival to name a few. Their latest single ”Heart of Fire” came out in early 2019 followed by selected shows in Sweden.