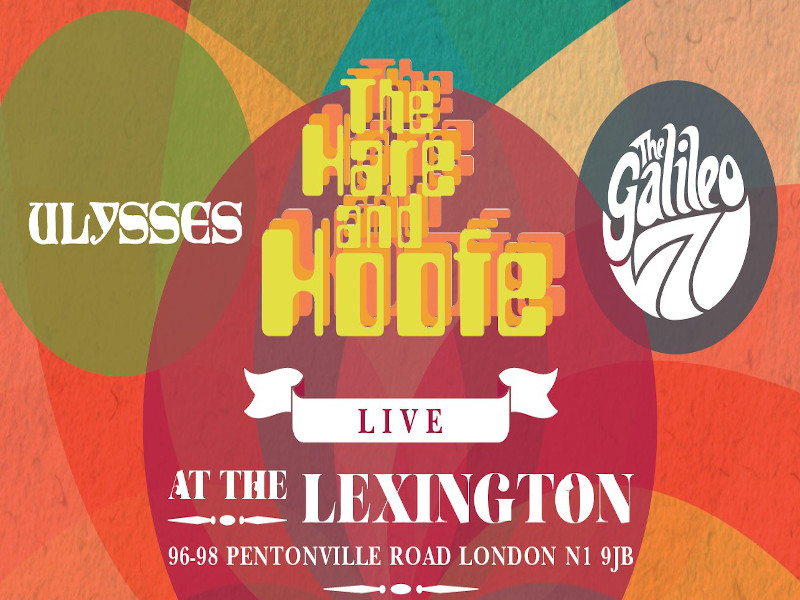 The Hare and Hoofe, The Galileo 7, Ulysses

Triple header! The Hare and Hoofe, The Galileo 7, Ulysses come together. Each band has released a critically acclaimed album this year – let's celebrate.

The Hare And Hoofe

"Like a drugged-up wizard on a BMX... The future of eccentric psychedelic rock is in safe hands” Dom Lawson, Prog Rock

"What makes 'There Is Only Now' such an unadulterated joy is the combination of Crockford's sublime songwriting with the skilful raw power of the group's ensemble playing. a knockout." Vive Le Rock

"There may be other psych albums that get more critical and popular attention this year, but ('There Is Only Now') inspired me to seek out the band’s entire catalog to put into heavy rotation. I can’t say that for many bands these days." Fast'n' Bulbous

"...combine instantly lovable tunes with hints of psychedelia, the directness of the Mod spirit and a wonderfully inventive approach to arrangements / production to present an album that is vibrant and immediate. There’s a real sense of urgency to this record that will draw you in and want you to share their vision of Pop perfection." Fear and Loathing

"The band show off the vintage purple flash of a freakbeat combo, songs that stick and move like a boxer in tip-top shape, and enough power to light a small city for a year." Exystence

"Every track is like an injection of sunshine, followed swiftly by a punch. Knockout." Retro Man Blog

“On Safari is possibly the best Pop-Rock album of the decade. Yes people, it’s THAT good”5/5 review in STONER HIVE July 2019

“A fantastic ride from start to finish, the soundtrack to the summer we have yet to experience and certainly one of the most entertaining albums you will hear this year” 10/10 review in RPM Magazine June 2019

“If it was 1974 you could expect Ulysses to be selling millions, charmingly addictive and joyous Glam Rock meets Toy Town Psych Pop meets ELO meets 10CC, this romp will have you looking at the world in a far more positive way” 5/5 review in I DON’T HEAR A SINGLE June 2019

“A stack-heeled stomping sense of arse-kicking fun is palpable throughout, flying in pumping style" 9/10 review in CLASSIC ROCK MAGAZINE June 2019

“A smorgasbord of sounds, brilliantly tongue in cheek, yet reverential” 8/10 review in MUSIPEDIA OF METAL June 2019