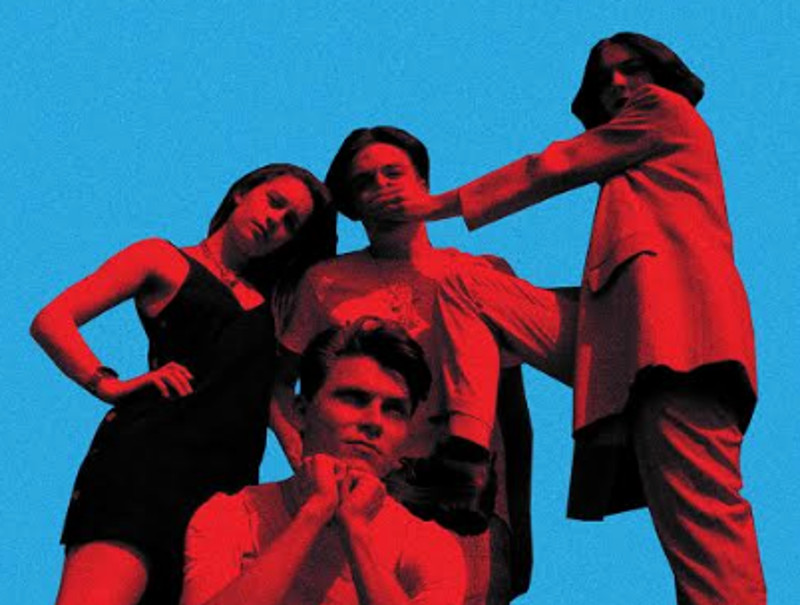 “I've learned a lot from making big mistakes,” says Sophie & The Giants’ magnetic singer Sophie Scott. “When you’re younger you think you know how the world works… But you fucking don’t."

Welcome to the world of Sophie & The Giants, practitioners of forward-looking, left-leaning emotional pop: a fresh, raw fusion of the band’s collective influences — which range from Siouxsie and Debbie Harry to Radiohead and Jamie T. The band formed at music college in the spring of 2017 Sophie (vocals and guitar), Chris Hill (drums), Bailey Stapledon (bass) and Toby Holmes (guitar), moving to their adopted hometown of Sheffield shortly afterwards; more recently they’ve been taking their intense, life-affirming and rapidly expanding set of songs on tour with the likes of Tom Grennan, Yonaka and Reverend and The Makers.

And at the heart of it all is pop’s most captivating new frontperson, whose teenage life is chronicled with unflinching honesty on Sophie & The Giants’ debut EP Adolescence. It’s a collection whose candid songs include Waste My Air, which Sophie wrote last year about the end of a toxic relationship.

“I was blinded by love for a long time, and put up with shit for a long time, and I realised I’d wasted a lot of my own time,” she explains — and to make matters more complicated her boyfriend at the time had also been Sophie & The Giants’ first guitarist, as well as Sophie’s flatmate.

“I had an epiphany, packed my stuff and was out the same day,” Sophie recalls. “I knew I needed to stop people walking over me and making me feel like shit. In that moment, I was the strongest I’d ever felt. Waste My Air is about how I felt once I was out of that relationship.” The theme of growing up and finding yourself is strong throughout Adolescence, an EP brimming with courage and confidence.

Sophie’s frank lyrics may well strike a note with anyone experiencing difficulties in their own lives, but they’re also Sophie singing to her younger self. She describes herself as having been an anxious child, with confidence issues not helped by persistent bullying she received at school for the crime of having red hair. It went on for years. Looking back, it’s easy to see exactly how and why that unhappiness at school impacted on Sophie’s life at home, where she’d continuously pick fights with her parents, but back then Sophie was just cast as difficult, or stubborn. Sophie joined a choir after school — a move that led to the unusual mid-teens experience of performing at Wembley Arena — which fulfilled its intended purpose and provided a confidence boost. But it had been songwriting in the privacy of her bedroom, and in an occasionally deserted school music room, that proved to be Sophie’s salvation.

“I can’t remember a time when there weren’t melodies in my head,” she notes. “When I started writing lyrics and playing the guitar, suddenly it wasn't all in my head any more.”

All of which meant that at 18 she left the mean streets of Staines and headed to music college in Guildford, Surrey, which is where Sophie met her Giants. In the band’s earliest incarnation Sophie was accompanied by musicians who were all, for some reason, extraordinarily tall.

“Now we’re just average height,” admits Chris, who joined Sophie having previously been in what he describes as “a pretentious math rock band”. Bailey was next to join — he’d been a fan of the band’s earliest lineup. “Then one day,” Bailey remembers, “Chris and I were having a meeting in Sophie's room, and just as we decided Toby should be our new guitarist he walked past the window, which was good timing.” All members faced their own challenges at music college, from the defeatist attitude of tutors who prepared musicians for life as session artists, to the singers who just wanted to be models. Sophie, once again, felt excluded from all this, but was not prepared to let history repeat itself.

“At college you have all these little cliques,” Chris says. “Sophie wasn’t in them — and I saw that give her strength. It completely changed her. She came out stronger.”

In the spring of 2017 the band had only been together eight weeks but finished college and took a leap into the unknown, moving as one to their adopted home of Sheffield, with Sophie having fallen in love with the city after a visit to work with Reverend & The Makers frontman Jon McClure, who subsequently became an unofficial mentor to the band. Toby, who’d only been in the band two months, hadn’t even visited Sheffield before he dumped his bags down in the house the band would share together. “I had faith,” Toby remembers. “More importantly, I didn't want to live apart from the rest of the band. I didn’t want to miss this opportunity.”

The band’s house on a suburban street two miles west of the city centre was a shambles: running water — thanks to a leaking ceiling — but taps that didn’t work. Chris’ bedroom, which was actually the lounge, didn’t have a door, unless you counted the front door; the back door, which became the front door, had a broken handle. It was hard to forget the house was on a hill because the floors sloped, meaning that when Chris was working in the upstairs studio he’d gradually slide from one end of the desk to the other. Slightly awful, then, but perfect at the same time.

“By living together we figured out who we are not just as individuals but as a unit,” Sophie adds. “We've learned a lot in the last year, but above all we’ve learned what it actually means to be a band.”

Listeners won’t need to move to Sheffield to find that out for themselves: the Adolescence EP is a brilliantly focused first release by one of Britain’s most exciting new groups. While Sophie continues to toy with justifying her band’s name by putting Bailey, Chris and Toby in heels, the empowering nature of her lyrics means that the ‘giants’ concept has taken on a new meaning: this is music that’s all about standing tall. It’s about owning who you are, Sophie suggests. “We want people to come together because of our music,” Chris adds. “The important thing is that you need to be yourself.” Adds Bailey: “Life’s full of cliques but our theory is: fuck all that, here's some music.”

“We'd love to be a pop band that makes a difference by making music human again,” Sophie adds.“Every song I've written is from an experiences I've had; human mistakes that I've made and lived through.”

Stone Cold, for instance, is all about Sophie’s idiosyncratic take on love: “Songs from female singers are so often about unrequited love, but for me a lot of the time it's the other way round: it’s upsetting not being able to feel the way they want you to, because you're so focused on other things. You feel like a stone cold bitch.” Then there’s Space Girl, in which Sophie debates

“spending your whole childhood aspiring to be something, then when it starts happening you begin to wonder if you can handle it, and what you really want”.

But the Adolescence EP is not about wallowing, or resting on laurels, and it’s certainly not about admitting defeat. It’s about coming out fighting. The spiky fury of Bulldog, which documents the time a friend of the band was assaulted by their partner, is proof of that.

None of the band’s single or EP releases are disconnected. They’re all chapters of the same story. And there’s a key line in the band’s earlier song Monsters — “the future beckons you” — that brilliantly sums up the band’s ideology.

“Something can feel really shit at the time, whether it’s when you’re growing up, or when you first come out of a relationship, and there's this sense of impending doom,” Sophie explains. “But in the back of your mind, you know that in a couple of months' time you won't give a shit. Things will get better; everything passes. The future is pulling you forward. And when you get older, you'll be a little bit wiser.”

It’s all about moving forward, and of course Sophie & The Giants’ rapidly swelling fanbase, the honorary giants who over the last year have fallen in love with the band at their support slots, festival dates and headline shows, are coming along for the ride too.