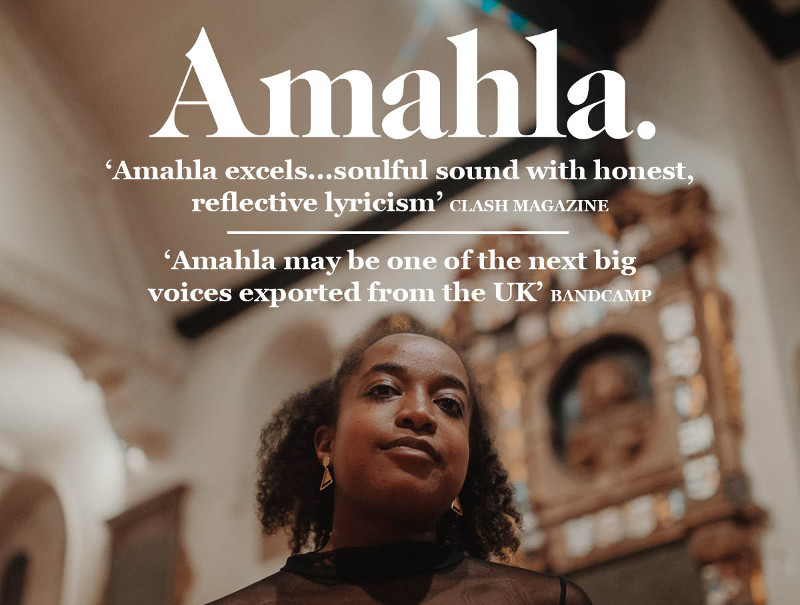 Amahla 2019 Bio Hackney raised singer, songwriter and musician Amahla taps into an era before her time to create vintage-inspired Soul music. After releasing her debut single 'Old Soul'  which received support from the likes of BBC 1Xtra and 6Music, Amahla was awarded the PRS Lynsey De Paul Prize for outstanding female songwriters. Amahla rounded off 2018 as a recipient of the second ever MOBO Awards X Help Musicians fund for her exceptional voice. Since, Amahla released her critically acclaimed EP ‘Consider This’ and over the course of the year has gained tremendous support from music press with impressive features and reviews from The 405, The Line of Best Fit, Complex UK, Bandcamp, Earmilk and more.

"She possesses the vocal ability to knock your ears clean off your head.. but instead puts all the focus and effort into the subject matter, using her singing ability as a vehicle for her stories" – Earmilk

With a focus on live instrumentation Amahla is a commanding live performer having already packed out two London headline shows at Camden Roundhouse and St Pancras Old Church, as well as performances at Cheltenham Jazz Festival where she was named as ‘one to watch’ by Decca Records and two sets at The Great Escape Festival 2019. All this has led to accomplished performances at legendary venues such as The Jazz Cafe and The Royal Albert Hall.

Most recently Amahla wrote and featured on the soulful Drum and Bass track ‘In The Moment’ with legendary duo Brookes Brothers. This saw support on Spotify’s New Music Friday playlist and has helped her voice reach a wider audience.

Amahla is set to release ‘Have Mercy’ the first single from her sophomore EP on July 19th 2019. Just one year has seen Amahla achieve some of her biggest musical and personal goals; it is exciting to see where 2020 will take her.

“Amahla may be one of the next big voices exported from the U.K” - Bandcamp

“The song pieces together the truth of Amahla's life through fragmented memories, brought to life with help from Amahla's detailed and diligent songwriting.” - Complex UK
https://www.facebook.com/events/2738969582798316/