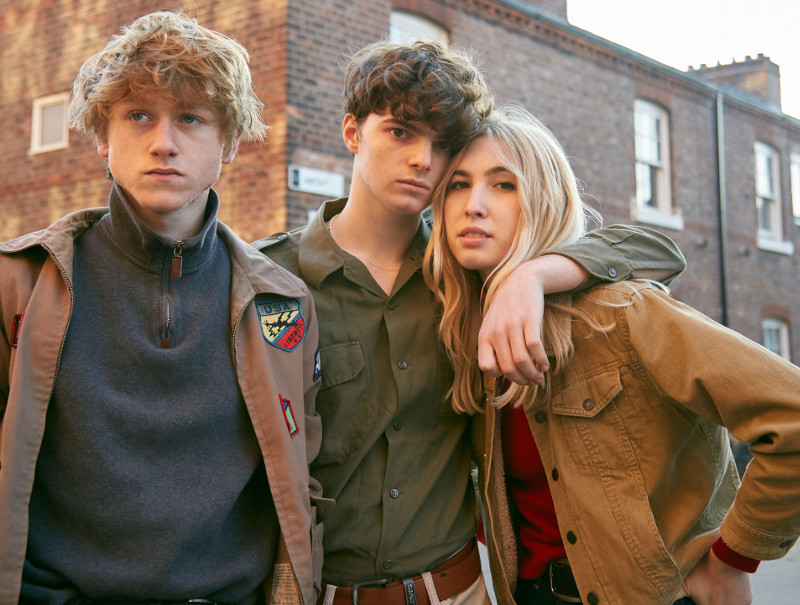 Like a homage to smoke-filled vaults, aging billiard rooms and crumby packets of pork scratchings in the Working Men’s Clubs of days gone by, Todmorden-by-way of-Europe trio Syd, Jake and Giulia are about to fling open the doors of their own millennial social hub with the fresh post-punk of infectious debut single, ‘Bad Blood’ / ‘Suburban Heights.’

“We grew up in northern towns trying to get in to pubs in social clubs because that’s all we had. The name is an ode to that,” explains Working Men’s Club’s 17-year-old singer and guitarist, Sydney Minsky-Sargeant. “Our surroundings and their differences has influenced us a lot on these tracks.”

Joined by guitarist-vocalist Giulia Bonometti, 23 and drummer Jake Bogacki, 18, the trio have always had a clear sense of their whereabouts; quite simply, they wouldn’t even exist without multi-nationalism. Meeting at college in Manchester, Syd and Jake are from Todmorden and Hebden Bridge, but their families hail from Poland whilst Giulia moved to the UK from Lake Garda, Italy. “The songs are based on the culture of walking round Manchester every day then going back to the countryside each night and how the contrast of going back into the hills made us sane,” Syd tells.

With the start-stop sound of Talking Heads, Gang of Four and Television, ‘Bad Blood,’ fuses 70s post-punk with the stomp of Parquet Courts’ positivity and resonates with the start of the weekend. From The Knack style groove to Syd’s half-spoken words which jab through Strokes guitar lines with Mark E Smith drawl, it’s the feeling of a Saturday spent scuffing about in thrift stores and hanging out with friends.

If ‘Bad Blood’ is the day, ‘Suburban Heights' is the night. Recorded with Alex Greave at The Nave in Leeds, steady riffs from Syd’s fingers tap-dance on the strings alongside Jake’s skill in working a jagged snare. Meanwhile Giulia’s heavenly disco ‘ooohs’ recall Donna Summer feeling the love whilst cutting right to the contentious subject of gentrification. “Suburban Heights refers to how apparent it is that cities are expanding to hold more people and buildings are rising, they’re morphing into these dystopian party towns,” tells Syd.

Already with shows supporting The Wedding Present and Brian Jonestown Massacre behind them, Syd says it’s only the beginning; “Those shows were great experiences and ones we’ll have for life. We love making music and we’re so grateful for what we’ve achieved so far; hopefully there’ll be plenty more to come.”

Oscar Lang - Having already worked on a string of acclaimed releases from friends and fellow up and comers including labelmate Beabadoobee and Norway's talented Girl In Red, Oscar Lang is carving out a reputation as the songwriter and producer pushing bedroom pop to exciting new heights: a budding Brian Wilson for Gen Z.

Alfie Templeman - 15 year-old Bedfordshire songwriter and multi-instrumentalist Alfie Templeman is sharing his debut single ‘Like An Animal’. Templeman grew up in the tiny village of Carlton, where he still lives with his parents, and recorded ‘Like An Animal’ entirely in his bedroom out of school hours. The single is taken from Templeman’s debut EP - also Like An Animal - which is being released on revered independent label Chess Club: home to MØ and Sundara Karma and renowned for early releases from Wolf Alice, Jungle, and Mumford & Sons. Explaining the meaning behind ‘Like An Animal’s down-at-heel yet subtly beautiful message, Templeman said: “It’s about a man in a relationship who feels depressed every day of his life, but he can’t seem to figure why he’s down. His partner doesn’t show empathy and support to the way he feels. There’s a lack of love and care.” But the lilting guitars and swooning vocals draw ‘Like An Animal’ to a positive conclusion with the song’s protagonist moving on and owning his wellbeing. Alfie Templeman was born in a household blessed with musical talent - his sister is a pianist and plays trumpet, his dad is a zealous collector of guitars with more than twenty instruments scattered around at home - and it was inevitable that the curious young Alfie would ask for drum lessons aged just seven years old, having taken to rock and indie music avidly. Inspired by the rolling countryside around Carlton, the skies that passed across his window at night, and the flowers that would bloom in spring on the village green, Templeman began recording snippets of guitar, bass and drums - but never vocals - which would become his first ever formative demos. It wasn’t long before he’d taught himself to use more advanced studio software and in 2016, aged just 13 years-old, he decided to throw himself into bringing to life fully formed tracks - before and after his school classes and shifts helping out on building sites (“I kept having coughing fits the whole time. Never again,” he adds). Adding a finishing touch - his elegant, honeyed drawl - these early forays into production have been refined right up to the present day with the release of his debut single and EP of the same name ‘Like An Animal’. Templeman plays every instrument heard on the EP and put together the whole release in his bedroom - a homage to his DIY heroes Kevin Parker and Mac Demarco. The full EP is a tantalising window into the world of a new, young British artist so precociously talented and limitlessly promising. Whether it’s opener ‘Yellow Flowers’, full of wistful guitars and breezy vocals which bring to mind classic ‘70s songwriters like Harry Nilsson, or the closing track ‘Your Voice’, which he wrote after devouring CD after CD of ‘80s hits on a family road trip - each track is layered with sweet instrumentation and imagery belying his tender years.