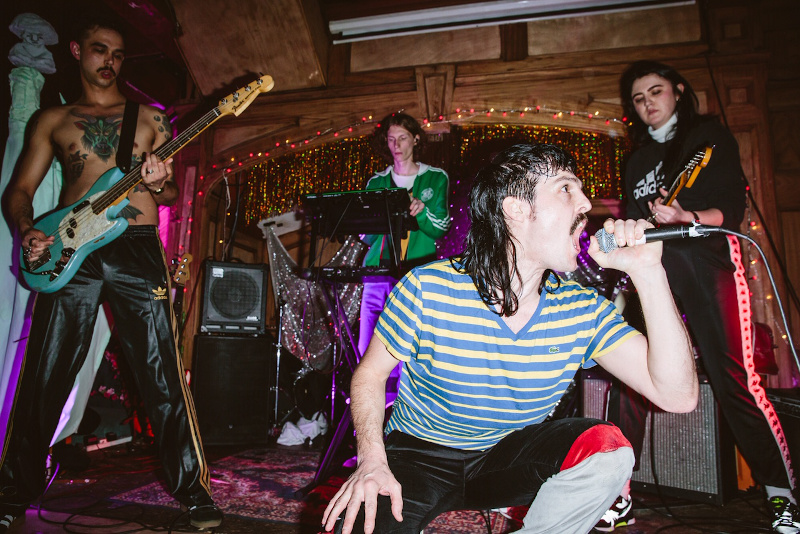 More than a live show, this is a group that will take you on a journey. It's a commanding, mesmerising ceremony through the gateways that only music can unlock. Drawing audiences, like summoning spirits, THE DSM IV are a revelation!

Primitive Acid House beats, an anarchic nature akin to The Fall, the wild abandon of the Stooges, the unapologetic freedom of Suicide, the astute observational lyricism of Arthur Lee, the unfakeable attitude of Happy Mondays, and guitars played how they should be and you can begin to imagine what this band are tuned in to.

Born out of their belief in the inexorable destiny of using their lives to make music, THE DSM IV bring their vision into reality with the deep desire to imbue the times in which we live with the belief - in the potential of all things!

The DSM IV are recording their debut album in 2020 at The Albion Rooms, Margate - The Libertines’s studio, following a stunning European Tour in 2019 with them.

If you want tunes & anthems for a new generation of real music fans, you'll find yourself... here.


"Finally, to add to the chaos, The DSM IV storm into the room. Much lauded as the new project of Eighties Matchbox B-Line Disaster frontman Guy McKnight, it surely won’t be long before they’re just referred to by their own name without the need for connection. With heavy synth reminiscent of early Human League and a compelling vocal, there is once again much interaction with the audience and a feeling that a raw hybrid of the past and present is unfolding before your eyes. When a man with a mullet has the audience straight up pogoing around him it’s hard not to smile" - Joyzine