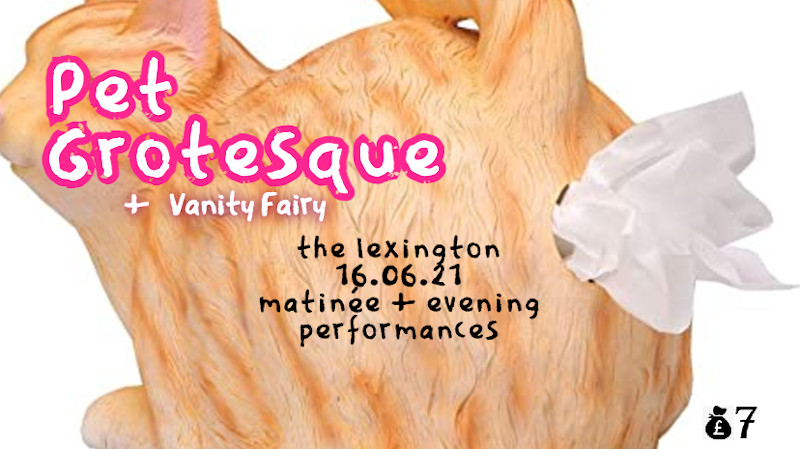 "PET GROTESQUE is the solo project of Calum Armstrong, who can also be found in the excellent Tiña (who released their debut album, Positive Mental Health, last week).

Channeling King Gizzard & The Lizard Wizard in terms of work ethic, Calum Armstrong has just released another album within the space of just a week under his Pet Grotesque moniker – Female Synth Player – and it’s an absolute marvel.

Kicking off is fittingly the lead title, “Female Synth Player” which opens as if you’re watching an 80s’ buddy cop movie with the duo driving a convertible Ferrari, top-down, in Miami Vice. It then kicks into lo-fi Ariel Pink-esque funk that also evokes the glitter-glam-disco psych-sounds of Aussie cosmonauts Moses Gunn Collective.

“Scratch” follows: a sun-kissed Balearic sultry-summer smoocher for the late beach nights; whilst the incredibly named “Cheburashka Man” is Bee Gees-esque with a Currents/ Slow Rush-era Tame Impala twang. If Scarface had ended (spoiler alert) with Tony Montana surviving, “Cheburashka Man” would be the theme to Tony driving off into the sunset to live happily (ish) ever after.

“Sour Dream” is a lovely, jangly, crooning psychedelic-pop ballad whilst “Thirst” is a crooning disco-floor filler that erupts into the Pond-era Man It Feels Like Space Again crunching psychedelic sound.

Akin to MGMT with a more lo-fi feel, “Shinichi Osawa” is an absolute juggernaut of gnawing space-kaleidoscopic synth-pop for the good times. If “Shinichi Osawa” epitomises the peak of fun times on the dancefloor, “Pingin Alone” is the post-club soundtrack: cruising around, suited and booted, searching for late-night neon-lit cocktail bars. If you’re a fan of The Growlers’ recent Natural Affair, then “Pingin Alone” will be up your street.

“Be Yourself” is a cosmic-psychedelic interlude before the magic carpet ride drops you into a celestial world of funk meets R’n’B and pop that’s not too dissimilar to Unknown Mortal Orchestra.”‘Be Yourself” really shows Pet Grotesque’s prowess in writing incredible, catchy pop songs.

“Kali” again has a nice Slow Rush feel, with a funk-laden bassline and some super-smooth and crisp drums and keys that wouldn’t be lost if they were on any of Dr Dre’s legendary albums.

Outro “The Babysitters” takes a more sultry R’n’ B pop turn, but with some nice wonky psychedelic pop and a Mac DeMarco-like croon to see out a fantastic album in style.

Female Synth Player stands out as one of 2020’s finest albums: one for the Ariel Pink, Unknown Mortal Orchestra, Tame Impala and modern-day Growlers fans. Pet Grotesque really has delivered something perfect for the summer days and nights with an LP that’s an arsenal of glitter-filled funk, disco and psych pop, and whilst it’s a shame that this didn’t get to soundtrack the glorious heatwave this year, it brings you back to the late nights, post-lockdown, sipping cans on the beach until the early hours.

And really quite frankly, anything that can evoke the memories of the better times of this horrid year is an absolute winner" - Backseat Mafia