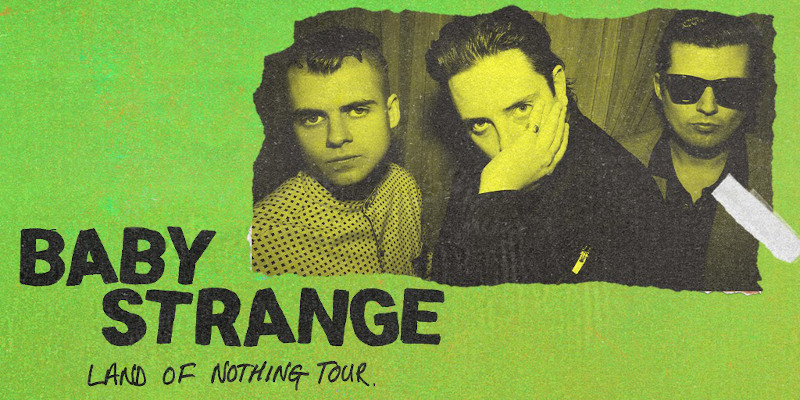 “A dark and high-paced caustic rhythm machine” – So Young Magazine

"the generational disdain of “Pure Evil” –  The Line of Best Fit

Make no mistake, Baby Strange are the newest evolution of punk.

Embodying the true nature and principles of the DIY ethic and taking a steadfast, creative all-encompassing approach to music as an artform, Baby Strange have carved out an almost cult like status for themselves within the underground UK music scene. Fronted by the magnetic & alluring Johnny Madden and completed with brothers Connaire & Aidan McCann, the proudly Glaswegian 3 piece are about to set out their stall and re- establish themselves as one of the most innovative and uncompromising outfits in the UK. Since the release of their critically acclaimed 2016 debut album ‘Want It Need It’ (Ignition Records), Baby Strange have toured relentlessly, building an enthusiastically rampant live audience, selling out venues across the UK & sharing stages with the likes of ‘Frank Carter & the Rattlesnakes’, ‘Slaves’, ‘Jamie T’ & ‘Wavves’.

Far from being just satisfied with focusing on their own journey, Baby Strange took a step further to solidifying themselves within the heart of the music community by launching their own club night ‘Club Sabbath’ back in 2015 at The Priory in Glasgow & The Old Blue Last in London (alongside Kilimanjaro).

Since its inception, it’s become something of legend and has played host to live sets or DJ sets from the likes of: Wolf Alice, Fontaine’s D.C, DMA’s, The Chats, Gang Of Four, The Magic Gang, Nick Allbrook (POND) and Marsicans.

The thriving community that Baby Strange played such an active role in building hasn’t gone unnoticed, having been covered recently by Vice magazine: “Club Sabbath has emerged as something of a rite of passage that’s seen people jump from being partygoers, on the fringe of the scene, to playing the stage in bands of their own”

Alongside Johnny’s work as a producer at 7West Studios (with Chris Marshall), this statement couldn’t be truer for some of the most vibrant & exciting bands on their way up at the moment: The Dunts, Spyres, Dead Pony, Rascalton & Pleasure Heads – all sight Baby Strange & Club Sabbath as a direct influence on the artists they are today. Johnny is a credited writer on many of their tracks and in partnership with Chris Marshall have produced some of the most accomplished & acclaimed records released in recent times.

After a short hiatus from releasing new music, the start of 2020 saw Baby Strange re- emerge from the underground with their vision refocused, their team refined & their ambition so re-energised that not even a global pandemic could stop it.

With a release schedule that now spans the course of 18 months, Baby Strange release their first singles More! More! More! And ‘Club Sabbath’ on the 29 th of October & 21 st

More! More! More! is as anthemic as it is raw and sees Johnny reflect upon time spent listening through “paper thin walls” to house parties fuelled by class A’s and terrible music. Essentially a commentary on a generation that’s stuck in its ways & doesn’t want to grow up. Hard hitting lyrics that are encased in stunning melody, offset against groove ridden, bass heavy guitars and four to the floor drums that will see heads nodding in the mainstream & pits started in the underground.