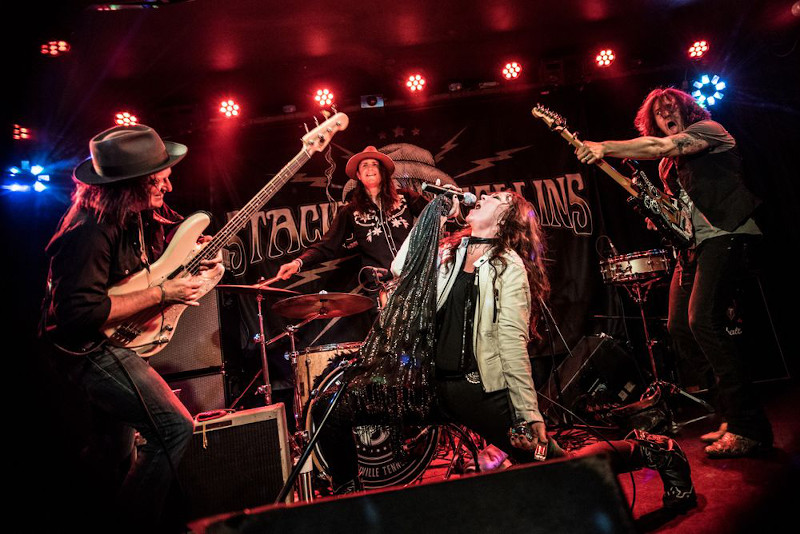 Sunday, May 31, 19:00
adv £13.20
Stacie Collins hears it every night. Same thing. “Over and over I get, “I’ve never seen a girl do that,’” says Collins, who tends to smile sweetly and just say, “Thank you,” after finishing shows where she and her harmonica howl, moan, rock and roll through hours of high-intensity, table-jumping, rejuvenating, exhilarating, rock & roll music. “Imagine a late-night lock-in jam with Aerosmith, the Stones, and ZZ Top, fronted by the equivalent of Ronnie Van Zant, or maybe even Shania Twain with balls,” is how Classic Rock magazine described this thing that Collins does.

She’s a favorite of Dan Baird, a Chuck ’n’ duck rocker who took the Georgia Satellites to chart-topping heights. She’s a favorite of Warner E. Hodges and Jason Ringenberg of Jason & the Scorchers, who invented country-punk music. Her husband, co-writer, and producer, Al Collins, plays bass these days for the Scorchers, but Scorcher-dom isn’t cause for fandom. Warner and Jason don’t like her ‘cause she’s related. They like her ‘cause she’s badass.

The latest iteration of Collins’ badassery is Roll the Dice, her fifth album and the best-yet showcase for her exuberant, harmonica-drenched, cocktail of rock, blues, and Americana. For this one, Collins brought in her bass-playing husband, guitar slingers Baird and Audley Freed (The Black Crowes, Dixie Chicks, Jakob Dylan), drummer, Brad Pemberton (Ryan Adams, Patty Griffin, Willie Nelson), and other master musicians. “With players like that, the energy comes from the music, and it becomes all about heart,” she says. “You leave your brain somewhere else. I don’t know how to classify this stuff, but people say it’s unique and familiar at the same time.”

Collins was born in Muskogee, Oklahoma, the setting for her hero Merle Haggard’s best-known song. Like Haggard, she was raised in Bakersfield, California, moving there when she was five, in time to soak up that town’s considerable music history. Bakersfield is where Haggard cut his teeth, where Buck Owens developed his signature blend of hyper-twang aggression and down-home harmonies. “When I lived there, Buck was still in town,” Collins says. “My mom worked at a golf course, and he’d come out and play. She said he was really nice. Then Dwight Yoakam came along, singing with Buck about Bakersfield and helping that whole scene out. It was a great place to grow up. I feel like, man, I come by this shit honestly.”

She also comes by it unexpectedly. At age 30, she picked up a harmonica, started listening to Sonny Boy Williamson, and began blending Bakersfield-bred bluster with distorted Chicago blues. What emerged was transformative for Collins, and highly entertaining for audiences. Beat-up cowboy hat, blues harp, rock attitude… unique and familiar, at the same time.

Al and Stacie Collins moved to Nashville on Jan. 1, 2001, and she soon came to the attention of Music City’s patron carnie saint of indie music promoters, Billy Block. “I owe Billy Block, because he took my demo to Europe, gave it to promoters, and that allowed me a career overseas,” she says. “For the past six years, I’ve gone there three or four times a year, playing for everyone from little kids to 80-year-olds.”

Block is gone now. Cancer. Collins remains, and thrives. On Roll the Dice, she rocks with fury, then spreads out over an expansive roots music terrain. “I don’t know how people are going to perceive it,” she says. But, really, she knows. Every night, same thing, over and over. “I’ve never seen a girl do that.”