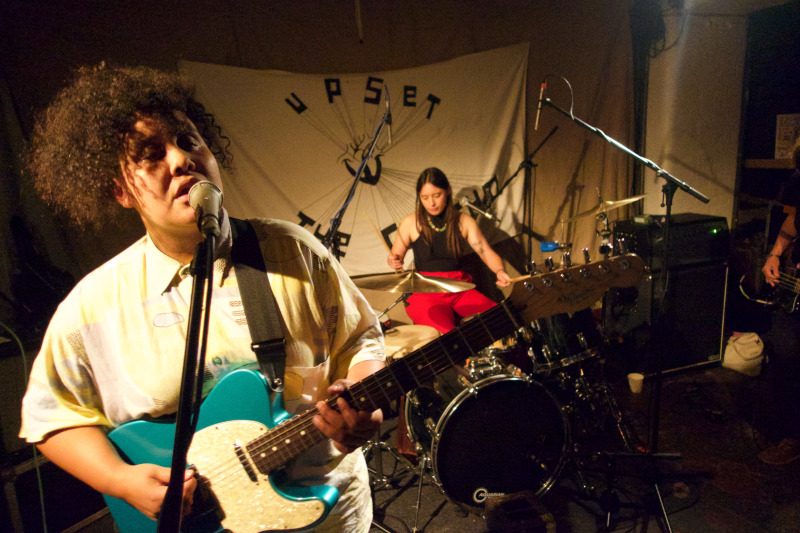 Friday, February 14, 19:30
adv £9 + booking fee
TRASH KIT are Rachel Aggs (guitar, vocals), Rachel Horwood (drums, vocals) and Gill Partington (bass). Three deeply creative individuals who play in a multitude of other groups including Bas Jan, Sacred Paws, Shopping and Bamboo, united by a shared decade of spry musicality that surges through their bodies, hearts and heads with Trash Kit. Their songs once succinct, patchwork post-punk numbers of an honest diary-like nature now tussle more with long-form songwriting, expeditious polyphony and cascades of sung-spoke vocals. This new focus began with their second album ‘Confidence’ (2014) and has now grown into something exhilarating and rapturous. New songs like ‘Disco’ have had their very fabric stretched into smart new shapes, allowing the band to run away with refrains and unlock the dancefloor.

Although Trash Kit have their forebears in bands like Sleater Kinney, The Ex and The Raincoats, their sound is still very much their own take on facing forwards and relies as much on the naturalism of an internalised folk music as on their sincerity of vision. Since forming in 2009, Trash Kit have released three albums for Upset The Rhythm and a selection of singles, last July however they made their most majestic move yet with their resoundingly huge ‘Horizon’ album. Garnering countless glowing reviews and featuring in many end of year lists for 2019 ‘Horizon’ is an album that forever listens for the next moment and will meet you once more at the vanishing point.
https://www.facebook.com/TRASH-KIT-329766302806/

HANDLE incorporate a diverse range of influences from samba to no wave. The three-piece from Manchester (now based between Manchester/London/Brussels) make a uniquely minimal sound, buoyed by poetic, urgent vocals. Each instrument (bass, drums, keyboard and voice) is permitted its own space, yet somehow the result is a brilliantly unified yet understated sonic experience that demands then commands your attention. Handle is made up of Giulio Erasmus and Nirvana Heire (former members of D.U.D.S) and Leo Hermitt, a genderqueer multidisciplinary artist, renowned for their challenging, thought-provoking work on the city’s arts and literary scenes. The group mesh politics with a trans experience of time and a vibrant, avant-garde freedom of approach. Powered by looping, hypnotic synth lines, quaking flexes of bass, clattering tribal percussion and expeditious, often agitated vocals that cordially sprint, Handle's songs - all of which clock in around the two minute mark - owe as much to performance poetry as they do to the vibrancy of post-punk. Handle's debut album ‘In Threes’ will be released March 6th by Upset The Rhythm and Maternal Voice and is a collection of frenetic sounds for frenzied forms.
https://soundcloud.com/upset-the-rhythm/handle-punctured-time
https://www.facebook.com/TRASH-KIT-329766302806/