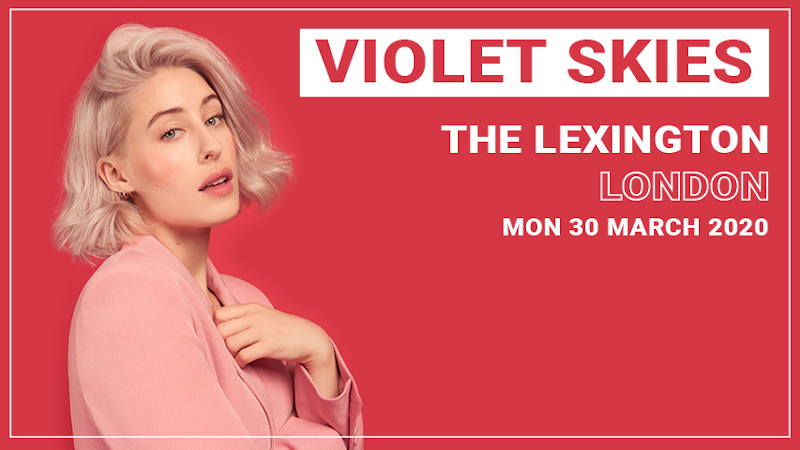 Monday, March 30, 19:00
adv £10 + booking fee
Following sold out debut London show, a new show for March 2020 is announced "I write and produce songs with my friends, I put them out. I make the all artwork with my friends too. Sometimes they're sad, sometimes they're kinda funny. Sometimes both. I'm Welsh.” You’ll be familiar with Violet Skies without realising it.  Having spent the last few years writing for other pop artists around the world, as well as founding the first global female-only writing camps, Violet Skies is setting up her stall alongside her artist peers; a British singer-songwriter with ambition as big as her voice. Fresh off a support tour with Orla Gartland ending at Scala, and now having just sold out her debut headline show, she has announced a new London show at The Lexington for March 30 th , 2020.

Tickets are going on sale this Friday 29th November 10AM

With several tracks out in the world, already amassing millions of streams and BBC radio playlist additions, Violet has stripped things right back for a brand-new heartwarming Christmas single “Two Of Us This Christmas”, which she self-produced. Violet grew up in a village in Wales, UK, a self-confessed nerd, but has known since age 4, that music was the career choice for her. Violet Skies (taken from her grandmother’s name) writes from the heart and co-produces most of her music; a combination of searingly emotional vocals, uncomfortably honest lyrics about relationships, and infectious melodies. Look out for lots more of what she would self-describe as “pop with teeth”, and lots more live shows during 2020.

Two of Us This Christmas is out now