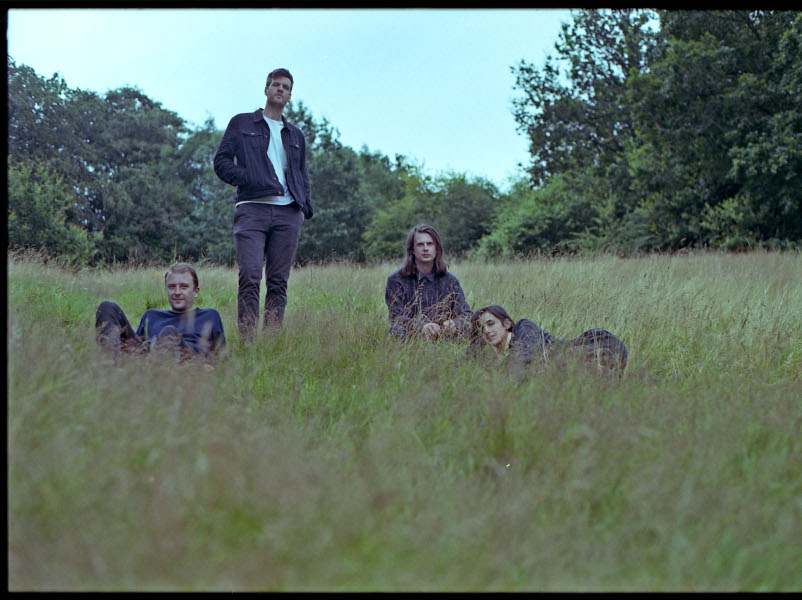 SPINNING COIN are Sean Armstrong (vocals, guitar), Jack Mellin (vocals, guitar), Rachel Taylor (bass, vocals, keyboards) and Chris White (drums). Hailing from Glasgow their cascading melodicism is topped with some amazing shredding. Their music connects into a local music scene more associated with Orange Juice, Teenage Fanclub, and of course The Pastels, who release the band’s records via their Geographic Music imprint. Their music is beautifully rough-hewn guitar pop that takes in frustration, but also gracefulness and splendour, in equal measure. On February 21st, Spinning Coin will release their second album ‘Hyacinth’. A brave step forward, ‘Hyacinth’ is an album full of poetry, light and warmth of heart, and presents a band holding nothing back. Throughout there is joy in spades, but also melancholy, and a checked fury, threading the group’s political vision through their reflections on the personal and the interpersonal. Jack explains that the new songs “are about the need for love in an often very unloving world. Trying to find a balance of some kind between feelings of apathy, negativity, detachment and action, positivity and oneness.” Whilst Mellin’s songs were more pointedly political on debut LP ‘Permo’, here he has built more complexity into his writing. Ultimately Spinning Coin’s ethos stays true to itself, as Sean expands about the experiences and the motivations behind the new music: “It’s trying to connect with other people on a human level, doing something that we love, and trying to embrace the unknown.” This show sees them head to London date during their European tour in support of ‘Hyacinth’ in March!

BAS JAN are a London-based experimental post-punk trio built around the remarkable and distinctive voice and songs of multi-instrumentalist and composer Serafina Steer. Named after the Dutch conceptual artist Bas Jan Ader, who was last seen setting out to sail across the Atlantic in 1975, Bas Jan’s earliest songs were initially conceived as Serafina Steer solo material, until Bas Jan co-founder members Sarah Anderson and Jenny Moore triangulated the whole collaboration and, in 2015, the band was born. Since recording Yes I Jan, both Sarah and Jenny have moved on to other projects, and currently joining Steer in the new incarnation of Bas Jan are violinist, bassist and vocalist Emma Smith (Meilyr Jones, Seamus Fogarty and founder member of the Elysian Quartet) and drummer and vocalist Rachel Horwood (Trash Kit, Bamboo). Bas Jan’s utterly brilliant debut album Yes I Jan was released via Lost Map Records in 2018.

ROBERT SOTELO is a cosmic pop melodist; a heartfelt multi-instrumentalist whose direct songs are curiously affecting. His debut album ‘Cusp’ from 2017 was packed with miniature psych overtures and earnest musings, he then followed this up in 2018 with an album called ‘Botanical’, more keyboard-minded and playful with its near-absurdist palette of sound and reflective mood. Last September Upset The Rhythm released Sotelo’s third album ‘Infinite Sprawling’, his first record since relocating from London to Glasgow and partly inspired by his new city’s inclusive and collaborative musical world. Recorded with Ruari MacLean (of Vital Idles, Golden Grrrls) and Edwin Stevens (Irma Vep, Yerba Mansa) at their home studio Namaste Sound, ‘Infinite Sprawling’ grew out of Sotelo’s sketchbook of skeletal songs, with MacLean and Stevens developing their own drum, guitar and keyboard parts. These songs pulled together like a wakeful stretch on a Sunday morning, flowering with a lightness of touch, sounding both carefree and brisk.